“The first thing they told me was: ‘Become a PCP and a Neighborhood Leader” 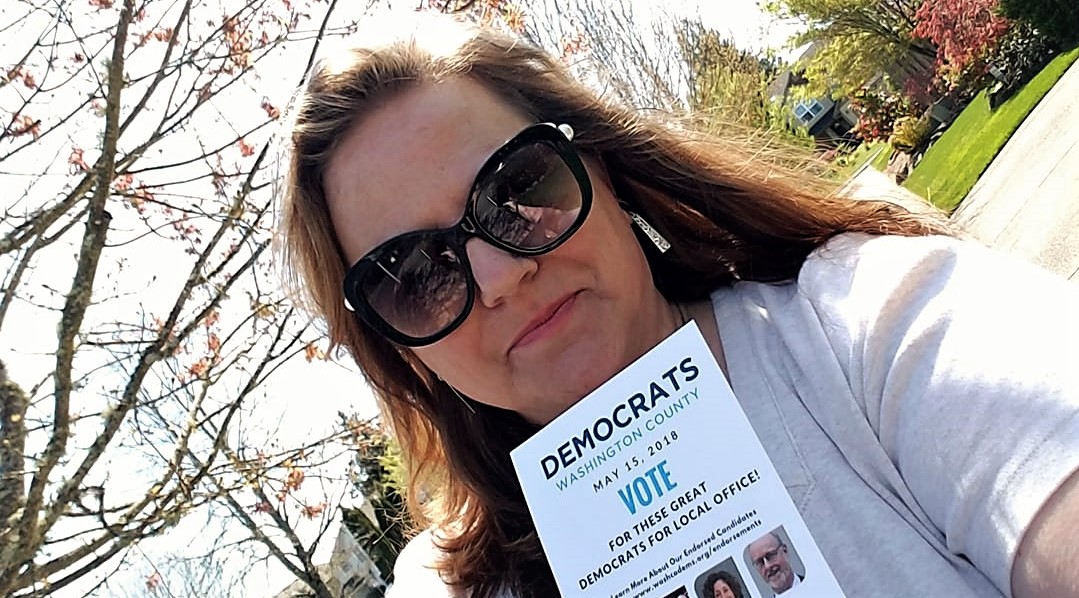 Last fall, Karen Reynolds met with members of Emerge Oregon – an organization dedicated to increasing the number of Democratic women leaders in public office.  She had decided to become more involved in local politics; maybe run for office. “The first thing they told me was ‘Become a PCP and a Neighborhood Leader’”, Karen recalled in a recent interview.  She continued: “I asked them, ‘What is a PCP? What is a Neighborhood Leader?’”

Karen lives in Forest Grove with her husband and three sons and has worked in the healthcare industry for 25 years. Her greatest passion is advocating for universal healthcare.  Her oldest son Cooper, who is attending Pacific University as a political science major, was diagnosed with cancer, a slow brain tumor 18-years ago. Medical expenses almost bankrupted her family. She understands the importance of universal health care and the importance of advocating for affordable healthcare.

“It takes a lot of guts the first couple of times”

Karen is a relatively new Neighborhood Leader.  She canvassed for Measure 101 and the primaries.  Karen credits WashCodems Field Coordinator, Carl Fisher, and the NLP training videos for preparing her for being a neighborhood leader.

When asked her about the first time she canvassed, she said “It was scary. It takes a lot of guts the first couple of times. After I had more positive reactions than I thought I would,  it got easier. There were a couple of people that weren’t so great but the others ones that were excited to meet me and excited about what I was doing and about what I said. That kind of crossed off the negatives.”

“In Forest Grove, we live in a bit of a bubble. We don’t necessarily know that we’re really in Washington County.” Karen believes sometimes, her neighbors don’t realize the impact county government has on their community. “It’s important to make them aware that county government can have a significant impact on the “bottom line” of their community.”

Head to the Hill

On May 9th, 2017, the day James Comey was fired, Karen and her son Cooper spent 10 hours on Capitol Hill visiting all Oregon representatives, and participating in the annual “Head to the Hill” advocacy event sponsored by the National Brain Tumor Society.

“I had never done anything like this before. Lucky we live in Oregon we have great elected officials. Staffers were amazing. Telling our story again and again, and being a part of that. I felt that I had some type of control and my voice did matter. Cooper was a huge Bernie Sanders fan. Bernie saw us in his office – He was wonderful and kind. Cooper smiled from ear to ear all the way home”. IT was these experiences that inspired Karen to take the next step and get involved.

The Neighborhood Leader program increases voter turnout. Turnout in Washington County was 31% for the May Primary. For voters in our Neighborhood Leader Program that were contacted face to face by a Neighborhood Leader, turnout was 58%. That’s a 27 point difference compared to the typical county voter. That difference is because of the work of people like Karen. Getting out on the doors to chat about anything isn’t easy, let alone politics.  Thank you, Karen, for being an involved Democrat and making a difference in your community.